Last week as I was heading to the airport to catch a flight from Mobile to Atlanta, my phone buzzed with a text alert from Delta. I knew what it was before even opening the message– a flight delay. Thirty minutes later, along came another text informing me of a second delay.

In the airline industry this is a classic example of a service pitfall. When travelers are told a flight will depart at a certain time, any delay negatively impacts the customer’s satisfaction and confidence in the product. While most airlines will have flight attendants monotonously apologize for the inconvenience once boarding has concluded, I have yet to experience a company who apologized for the delay after the fact—until last week.

The day after my delayed flight I received the following email from Delta. 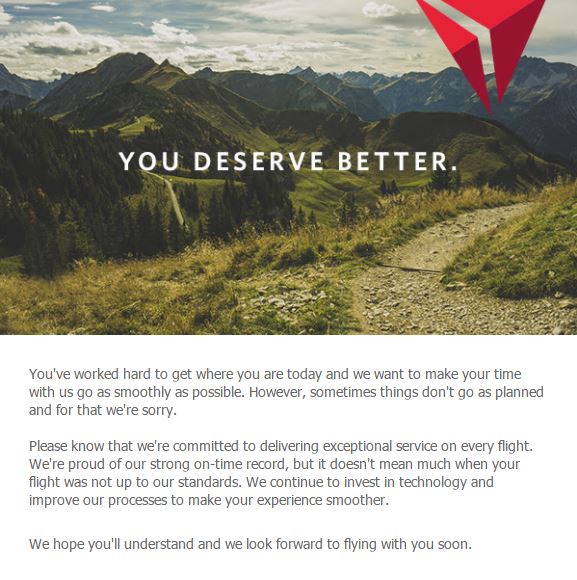 While many companies can identify service pitfalls within their organization and throughout interactions with customers, few execute the act of service recovery. Service recovery is the carefully designed and planned process that allows a company to apologize to a disgruntled customer with the hopes that the action returns the customer to a state of satisfaction. In the email above, Delta doesn’t try to explain away the problem or give excuses as to why the delay occurred. The fact that an email was even sent is surprising in itself as I’m sure it would have been easier not to send anything at all. Yet the email comes across as a genuine apology for the impact the pitfall may have had on my plans. It is clear that Delta has a process in place that identifies service pitfalls and makes an active attempt to recover through empathizing, and it’s something from which the multifamily industry can take a cue.

Work with your on-site teams to come up with a service recovery process. Identify past pitfalls and craft a series of actions that give your team a guide of how to respond when snags in service occur. While we certainly want to expect the best, we need to be prepared and plan for the worst. Pitfalls at your property could include: apartments not being ready for move-in, work orders not being completed, unexpected issues such as a water main leak leaving residents without water, and even how to handle a situation when a past price or special is no longer being offered.

Preparing for and having a plan in place to address these pitfalls will give your team the ability to handle situations with confidence and will allow you to regain the trust and loyalty of your residents and future residents.